This tutorial is the  12th part of a series : Building microservices through Event Driven Architecture.

In this tutorial, I will show how to publish events to apache KAFKA.

When a command happen on the client side , then it will produce an event ( ex : PlaceOrderCommand => OrderCreatedEvent).  New events are registered as uncommitted events by the aggregateroot  and inserted to a append only table (eventstore).

Now I must produce this events to a service bus so that applications subscribed to the service bus can pick the events in order to process them.

On the next steps, I will have a consumer that will pick the events , and index them to a high performance no-sql database that will be used by the Query side of my application as backend database.

What is Apache Kafka®? 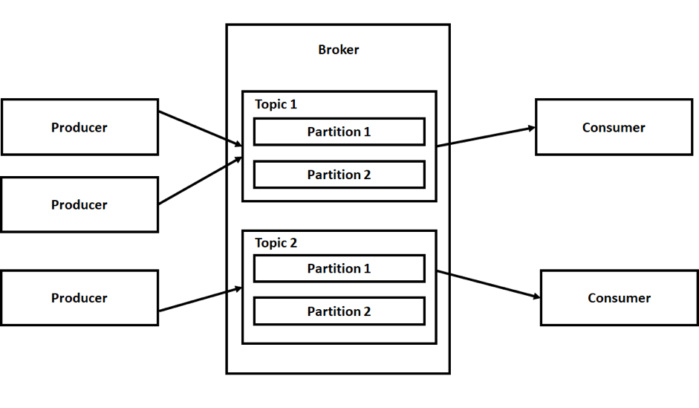 Go to the following url, download and install java  :  https://www.oracle.com/fr/java/technologies/javase/javase-jdk8-downloads.html 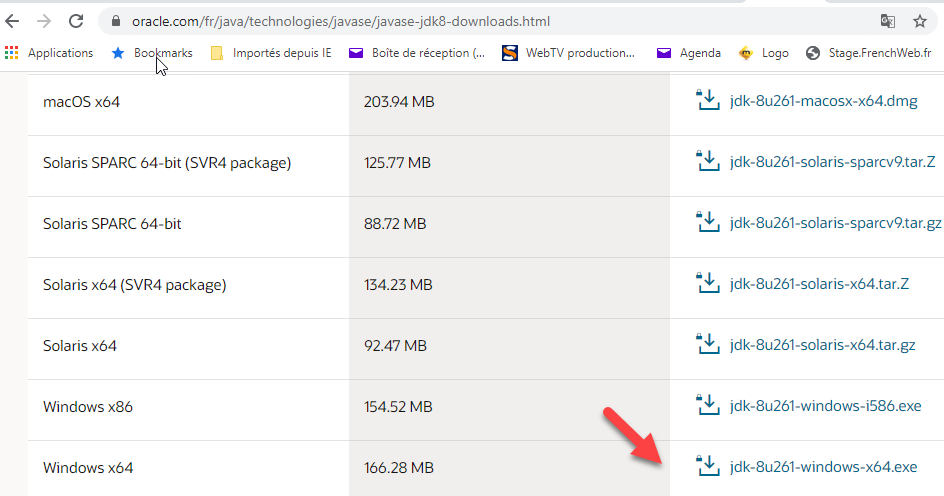 Got to the following url and dowload then install  Kafka : https://kafka.apache.org/downloads 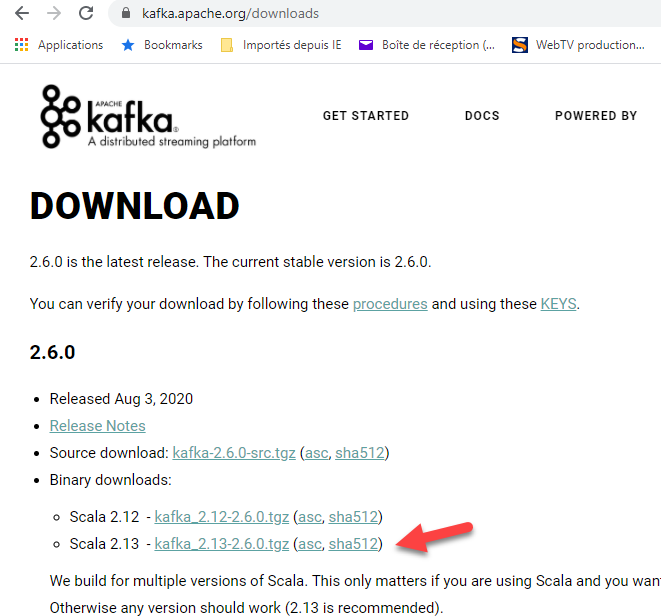 On the next screen, I choose the suggested mirror to download the binaries. 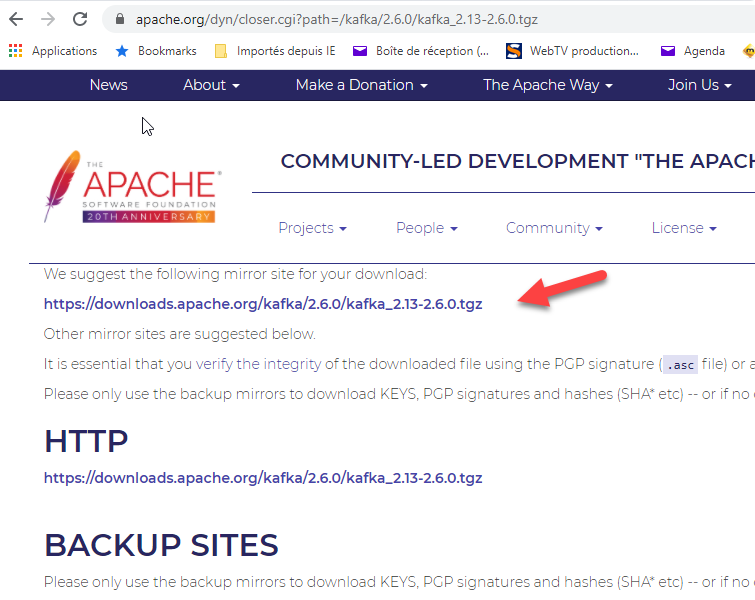 Download and extract the .tgz archive file to a installation folder  ( in my case  C:\KAFKADEMO folder on my workstation) .

You should have the following on windows

To verify that the installation is working , go under C:\KAFKADEMO\kafka_2.13-2.6.0\bin\windows location and run the following command : 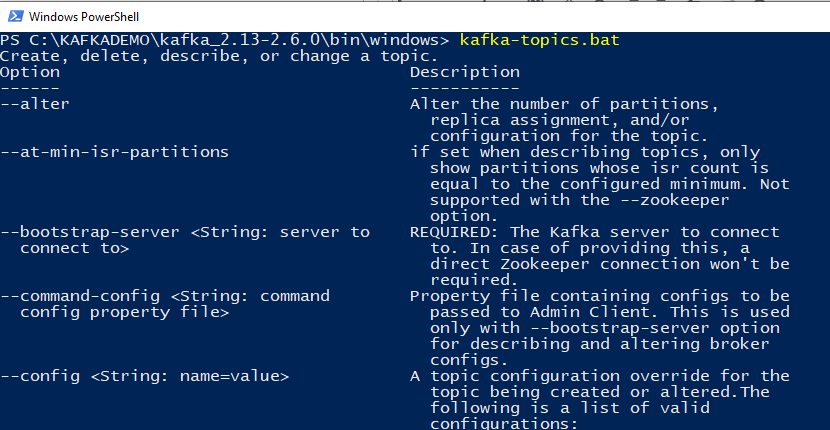 this step is optionnal, you can edit your environnement variables and add your kafka installation folder to the path 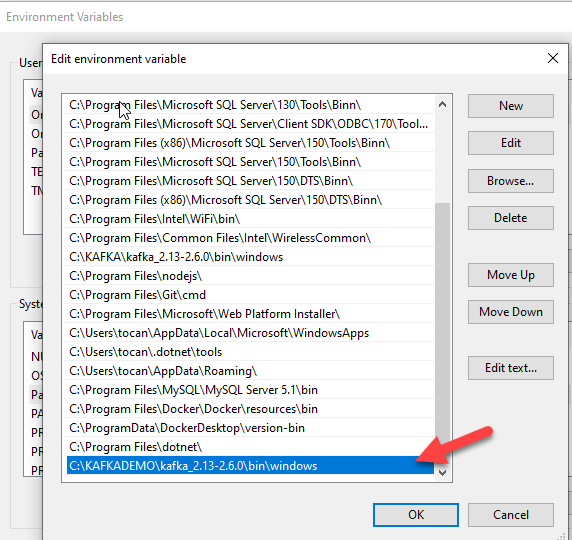 To configure  zookeeper, edit the zookeeper.properties file and update the dataDir directory as the following.

To configure  Kafka, edit the server.properties file and update the log.dirs directory as the following.

Run the following command to create a topic :

Run the following command to delete a topic :

To create a  producer that produce events to an apache kafka topic (eventstream), run the following command :

To start consuming  all events produced on topic (eventstream)  from the first event, run the following command :

What is Azure SignalR Service?

To create a SignalR hub, I define the following interface so as to have a strongly typed hub

To get notified when a message is published to the hub

To get notified when a client join a  specific topic

To get notified when a client leaves a specific topic 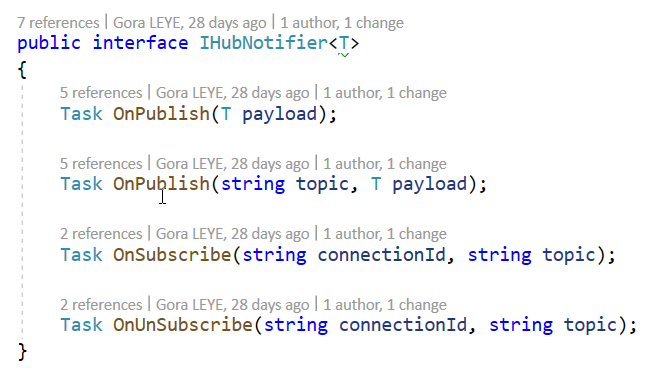 The following interface is used to subscribe and publish events

Here is the hub 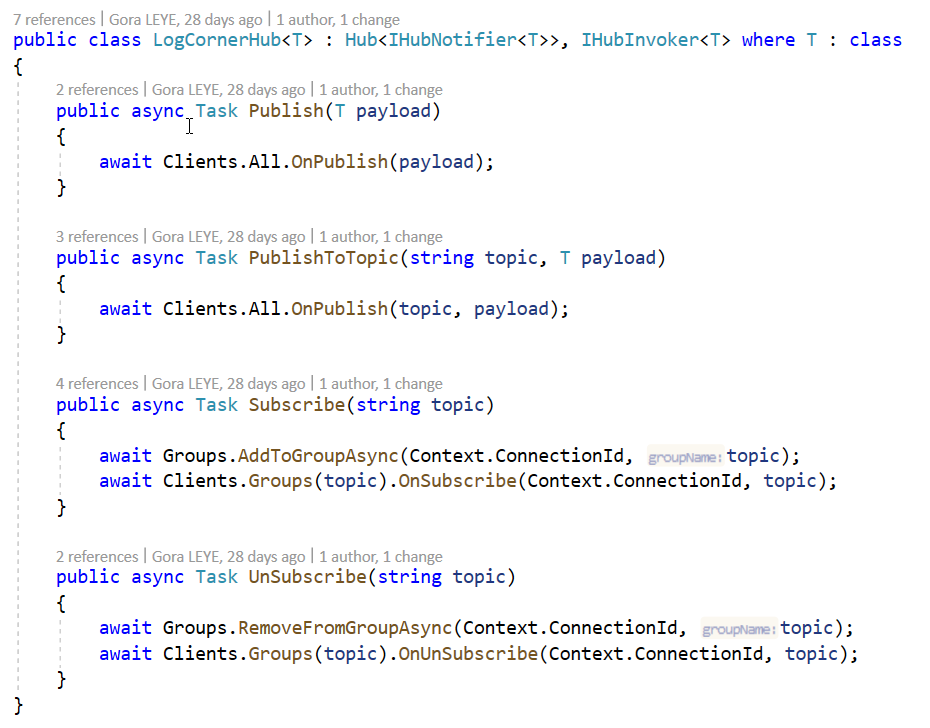 ISignalRNotifier is the interface that publish and receive messages 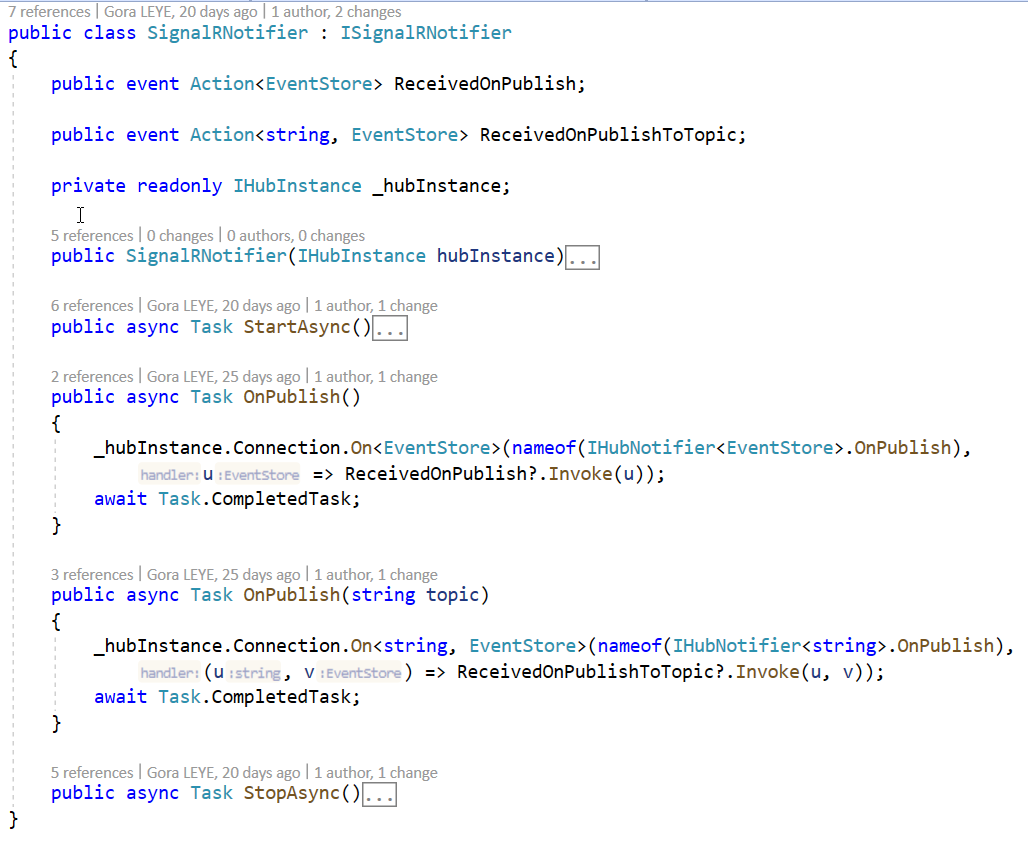 When a command happen, it is stored as an event to an eventstore, then the producer could pick the event from the event store and publish it to a service bus. I don’t want it to work like that because I will wonder what event are yet published or not (isPublihed = true/false)  and update it accordindly.

So  for more flexibility I will introduce a SignalR Hub. So the scenario that I will implement is :

When a command happen, it is stored as an event to a eventstore and then published to a SignalR hub topic.   So clients interrested to that topic will get notified and then can process the event.  The client can be a service bus, a mobile app, a Single Page Application , etc…

Let us go ahead and publish events to the SignalR hub from the command side of our system.

So I have to update the handle function of LogCorner.EduSync.Speech.Application.UseCases.EventSourcingHandler.cs file and add the following : 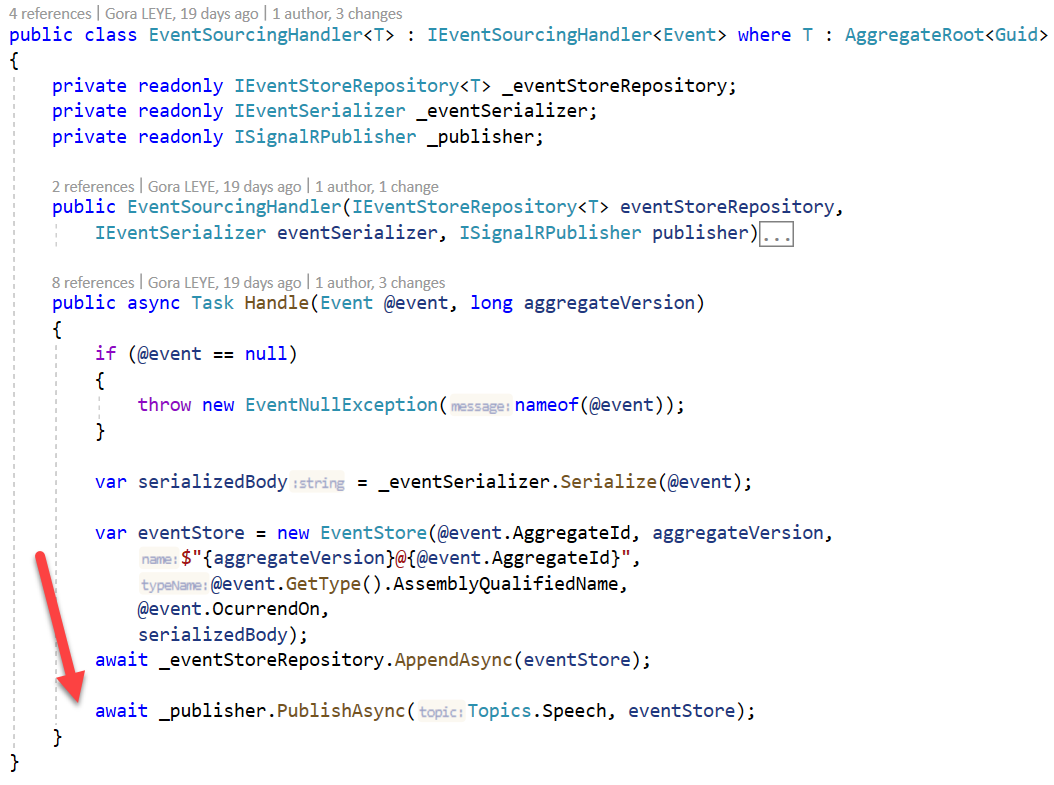 Lut us create a worker service and add the following classes

A backgroundService is a base class for implementing a long running IHostedService  https://docs.microsoft.com/en-us/dotnet/api/microsoft.extensions.hosting.backgroundservice?view=dotnet-plat-ext-3.1&WT.mc_id=DOP-MVP-5003013 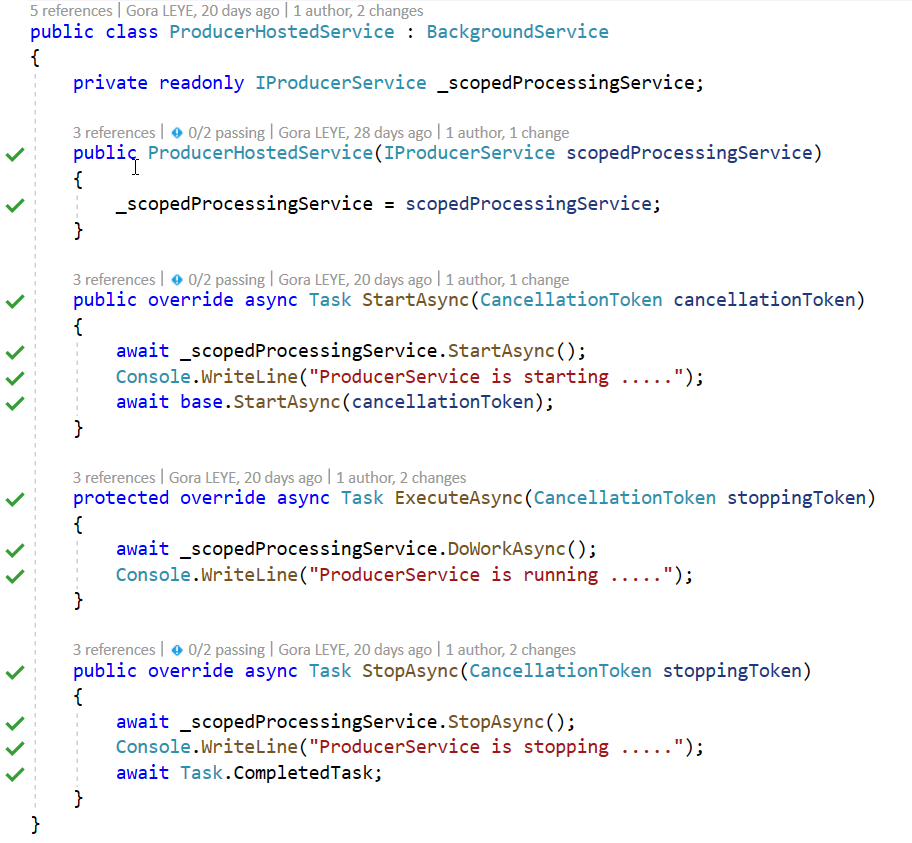 ProducerService subscribe to a signalR topic and handle events published on that topic. 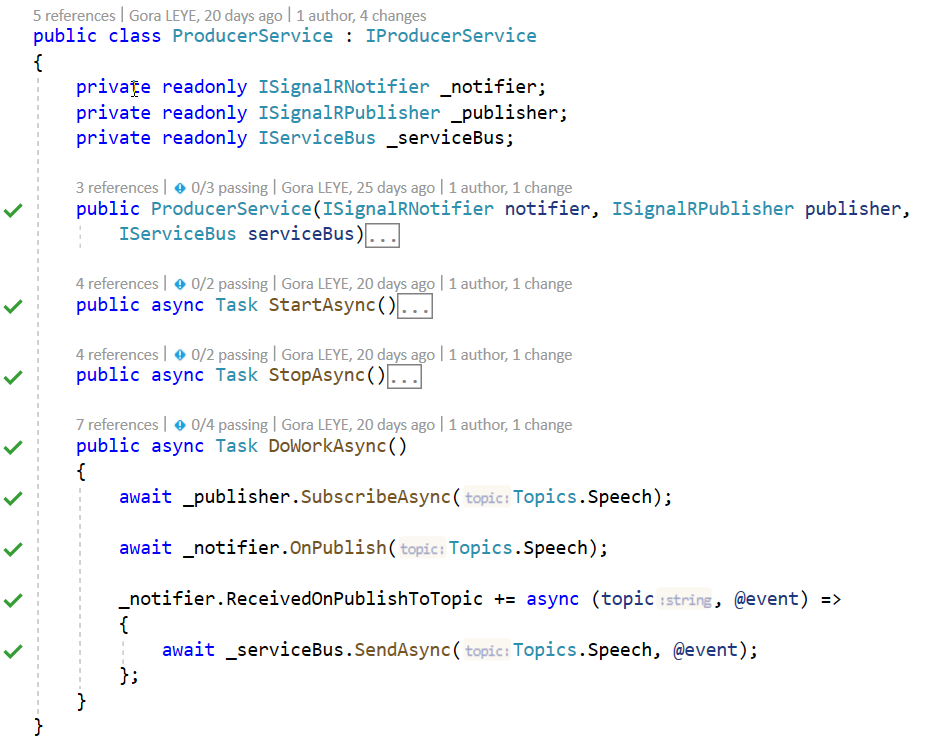 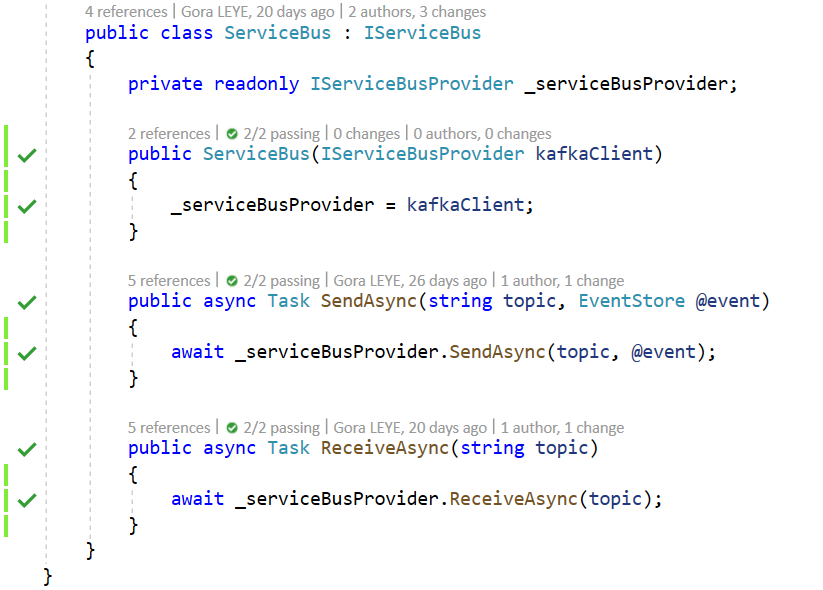 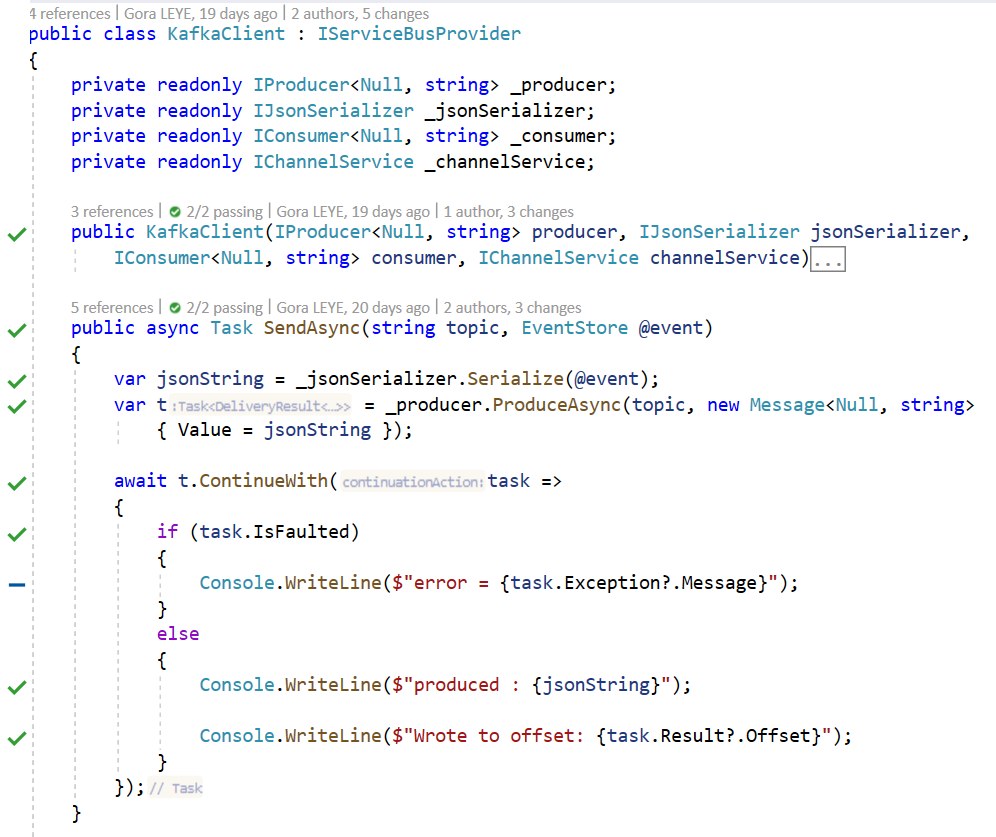 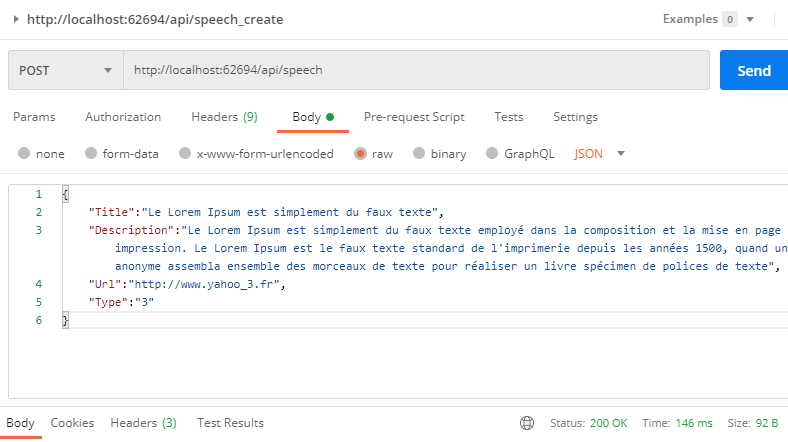 You should see the following output on the comsumer console, consuming the command posted on postman

Thanks for reading, if you have any feedback, feel free to post it